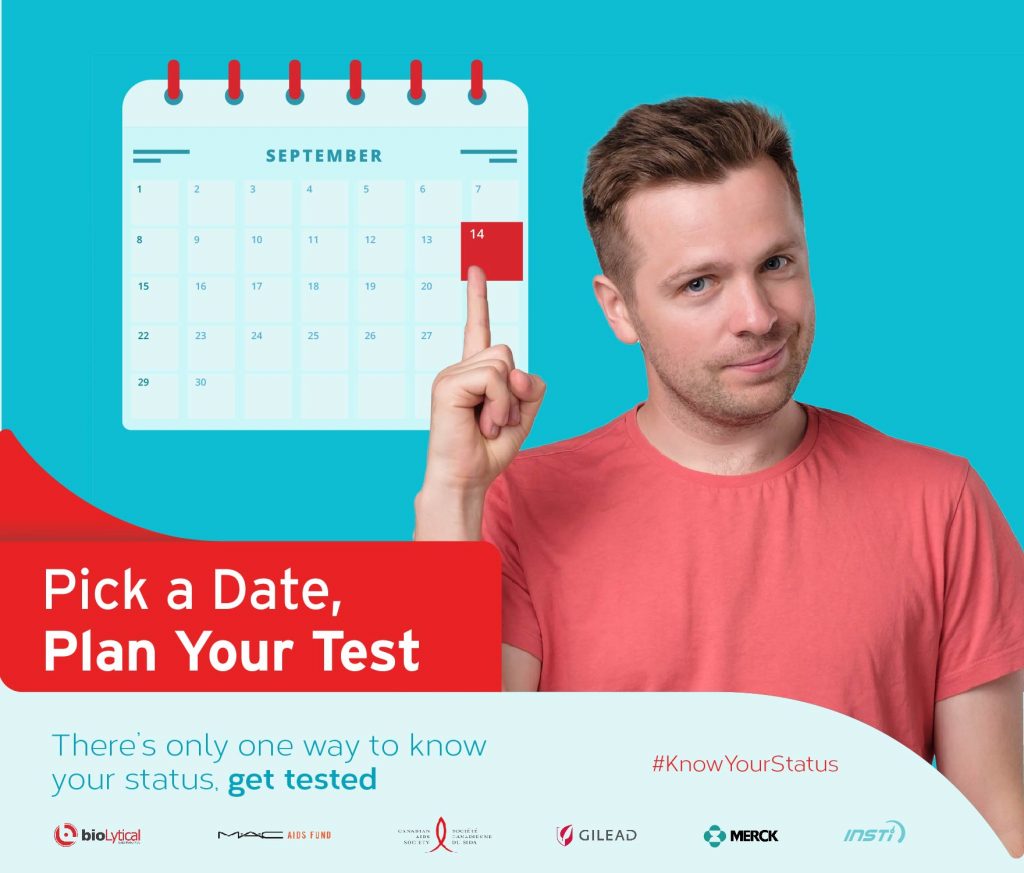 Saint John, November 26th, 2020 – As part of the Canadian AIDS Society’s (CAS) national HIV Testing Week initiative, RECAP and Avenue B hosted an HIV and sexually transmitted and blood-borne infection (STBBI) testing event at AVENUE B (62 Waterloo Street) on Wednesday, November 25, 2020 from 11am-3pm. “The goal of the event was to provide easy access to testing for at-risk populations who are often disproportionately affected by the virus”, said Julie Dingwell, Executive Director of AVENUE B.

National HIV Testing Week aims to reduce the stigma often associated with HIV testing. “Building on the success of last year’s initiative, this event was truly about normalizing HIV testing, increasing Canadians’ capacity to make informed decisions regarding their own sexual health, and decreasing stigma. We are so pleased to collaborate with RECAP and Avenue B to bring point-of-care testing (POCT) and dried blood spot (DBS) testing to New Brunswick”, said Gary Lacasse, Executive Director of CAS.

The theme for Testing Week is #KnowYourStatus. 1 in 7 Canadians living with HIV are unaware that they are HIV-positive, which makes the

possibility of transmitting the virus to others much more likely. The only way to know for certain if you’re HIV-positive is to get tested. The sooner you know your status the sooner you can be linked to care, which is even more important during the COVID-19 pandemic to achieve positive health outcomes.

At the end of 2016, an estimated 63,110 people in Canada were living with HIV, and according to the Public Health Agency of Canada’s 2018 HIV Surveillance Report, there has been a 25.5% increase in the number of new HIV infections in Canada between 2014 and 2018. National HIV Testing Week was created in response to these rising rates being seen in Canada. A major priority is to reach Canadians affected by HIV and other STBBIs and/or Canadians who have never been tested for HIV and other STBBIs. “Decreasing the barriers a person faces to get tested or in accessing care for HIV or other STBBIs is critical to improving the health of our community”, said Stefanie Materniak, Executive Director of The Centre for Research, Education and Clinical Care of At-Risk Populations (RECAP).

During this event, rapid HIV tests and DBS testing were administered to participants. Pre- and post-test counselling were provided to those being tested to help determine their risk factors. The DBS tests were sent to the Public Health Agency of Canada’s National Microbiology Laboratory for analysis. If a participant tests positive for HIV or another STBBI, RECAP and Avenue B will be able to immediately begin forming a long-term relationship with the individual and work toward ensuring their physical, mental, and emotional wellbeing from the moment of diagnosis. Those in the local community who would like to be tested can contact RECAP at (506) 214-9399 or e-mail testme@recapsj.ca to arrange to be tested.

“Hesitancy to get tested is a complex issue, with a myriad of reasons individuals might feel intimidated to access testing. It is vital to be able to provide testing using novel approaches to overcome some of the perceived barriers to testing,” said Dr. Guillaume Poliquin, Acting Scientific Director General of the Public Health Agency of Canada’s National Microbiology Laboratory (NML). “The NML has been working hard to expand the reach of techniques such as DBS testing across the country. Our goal is to make more Canadians aware of their health, and ultimately, reduce rates of STBBIs by increasing accessibility and reducing the stigma surrounding testing.”

In the next few months, RECAP will be partnering with Dr. Nitika Pant Pai’s research team based out of McGill University to begin using a new cutting-edge testing technology (AideSmart!) App together with a multiplex testing kit, which tests for multiple infections (HIV, hepatitis C, and syphilis) with a single drop of blood within 15-20 minutes. This technology is a game changer in that it will help us handle three key infections that affect at-risk populations disproportionately.

This collaborative, evidence-informed approach will sustain the benefits of the national Testing Week initiative, ensure information will be accessible to as many people as possible, and increase testing year-round so more Canadians living with HIV know their status and can take proper precautions to protect themselves and their sexual partners. 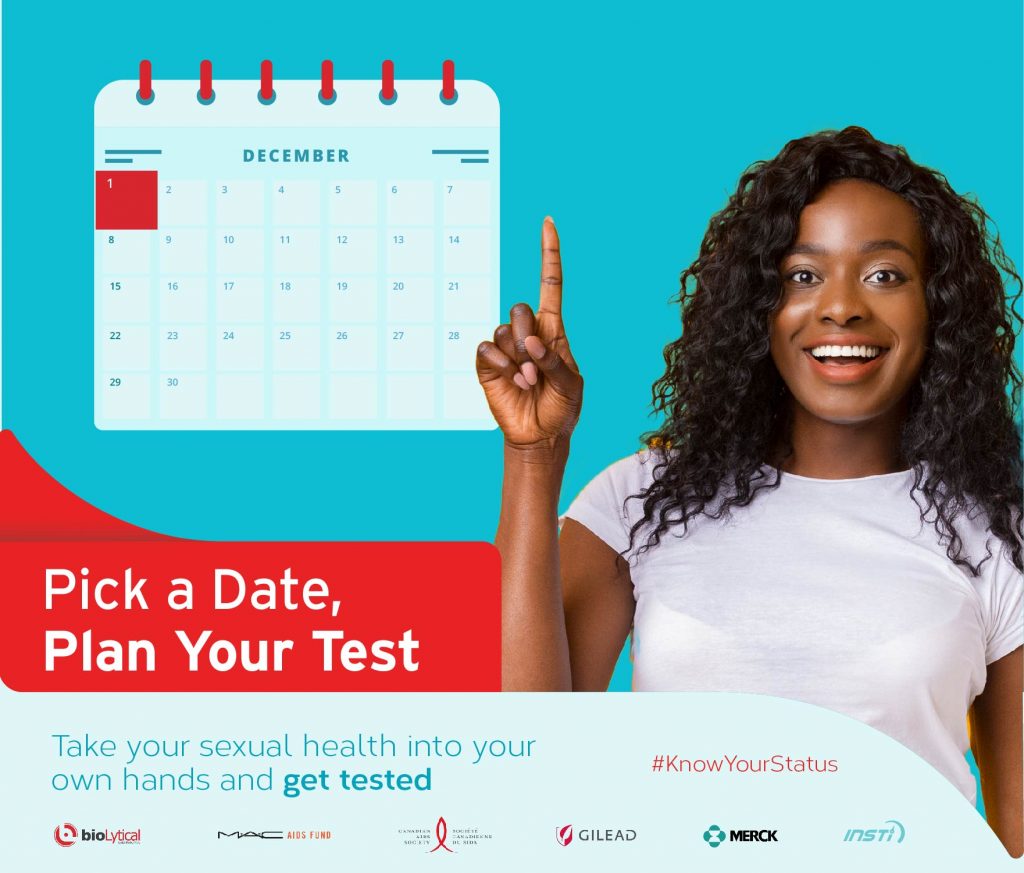 OTTAWA, November 18th, 2020 – Building off the success of the past two HIV Testing Days in 2018 and 2019, the Canadian AIDS Society (CAS) and steering committee are launching a national HIV Testing Week. Thousands of Canadians will hopefully get tested for HIV and other sexually transmitted and blood-borne infections (STBBIs) as part of the initiative.  Organized by CAS in collaboration with community-based organizations and local health authorities across Canada, this event aims to reduce barriers to regular HIV testing, increase Canadians’ knowledge of sexual health best practices, and to reduce stigma, says CAS Executive Director Gary Lacasse. “This year, we are also prioritizing having sexual health testing declared an essential service during the COVID-19 pandemic,” he adds.

Twenty percent of Canadians living with HIV are unaware of their HIV-positive status, and a major priority of this initiative is to reach the people who are disproportionately affected by HIV and other STBBIs and who have never been tested for HIV and other STBBIs. The theme #KnowYourStatus reflects the importance of testing to determine one’s HIV status and to be linked to care if diagnosed as HIV-positive. Reducing barriers and stigma to testing have always been the driving forces behind this initiative and are more important than ever amid the COVID-19 pandemic, which has closed or reduced the capacity of most testing facilities across Canada and contributed to a sharp rise in HIV and other STBBIs across Canada.

Minister of Health Patty Hajdu states, “I want to thank the Canadian AIDS Society, who has worked so hard for nearly 40 years to first of all, raise awareness and understand the disease, to raise money for research, and to support people living with HIV in Canada and around the world…I encourage everyone to talk about testing as a way to understand your status and to decrease the stigma, because of course we know that knowledge is actually how we get through pandemics, as we’re seeing with [COVID-19].”

At many of the participating testing sites, attendees can be tested using an INSTI® HIV Test, which provides results in under a minute. “With HIV on the rise in Canada, it is vital that every person is aware of the testing options that are available. We are proud that our INSTI HIV tests for point-of-care and at-home use can help Canadians know their status in only one minute, empowering them to make informed decisions about their health. It is an honour to be collaborating once again with the Canadian AIDS Society and community organizations around the country to share the important message of national HIV Testing Week,” states Robert Mackie, Chief Executive Officer of bioLytical Laboratories, the maker of INSTI®.

For more than 30 years, Gilead Sciences Canada, Inc. has been a leading innovator in the field of HIV, driving advances in treatment, prevention, testing and linkage to care. “At Gilead, we are firmly committed to seeking a future without HIV,” states Melissa Koomey, Vice President and General Manager at Gilead Canada. “That’s why we are collaborating with community organizations like the Canadian AIDS Society to highlight the need and importance of knowing one’s HIV status through screening and subsequent linkage to care.”

It is imperative that people know their status so that they can be linked to care.  One of our most effective tools, U=U (Undetectable=Untransmittable), is an initiative based on the scientific consensus that when you achieve viral suppression from taking HIV medicine and continue to stay at undetectable levels of HIV, you can stay healthy and have no risk of transmitting the virus to others; however, the earlier you #KnowYourStatus, the better your health outcomes will be.